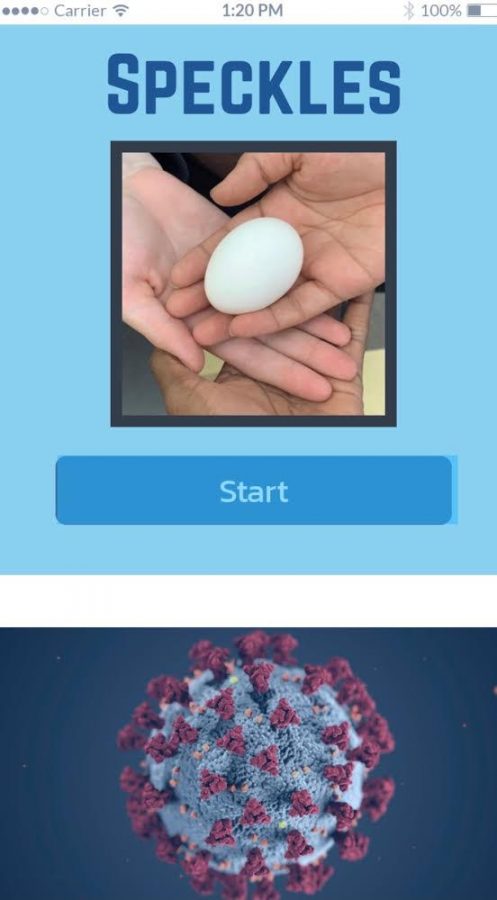 Students were challenged with designing a prototype for an app that would help slow the spread of COVID-19 specifically catering to the needs of their community.

“Speckles” easy design allows anyone of any age to navigate the app easily.  There are four languages to choose from in the app, so non-native English speakers can easily access all of its information as well as English speakers.

The app includes a feature to locate the nearest testing site to the user, as well as a self-care feature to address the mental health needs of the city of Everett during this difficult time.

“Especially for a lot of people who were impacted by the pandemic, the isolation that you feel during this quarantine is something that should be addressed more often,” Maharjan says.  “It’s important for people to be aware that your mental health is just as crucial as your physical health.”

All three girls agree that their favorite part of designing the app was the brainstorming process.  “I liked how we were bouncing off of each other’s ideas,” says Kirnon.  Problem solving is a skill this group enjoys greatly, as well as one they have encountered often in their STEM classes.

They credit their success to many of the skills they have learned from their experience in the STEM Academy.  “Problem solving was the basis of everything we did in engineering class,” says Maharjan,“so we had the skills to tackle this challenge efficiently and effectively, while also having fun with it.”

The project didn’t come without its challenges.  The group had a mere three days to do all of this work, all the while not being allowed in the same space.  Designing “Speckles” took tons of hard work and quite a few hours of late-night Zoom meetings.

“The hardest part was managing to work on a group project in this virtual atmosphere,” says Maharjan.  “We knew because we wouldn’t be seeing each other in person that good communication between all of us would be really important.”  The group also cites several WiFi issues in their list of challenges during this process.

Despite all of the time and effort the group put into this project, they were still completely shocked to find out that they had won.  “It didn’t feel real,” says Kirnon.  “We didn’t expect to win at all.”

When first assigned the project, the group admits that they were not the most excited, especially given the time constraints that they were under, but throughout the process, it began to feel less like work and more like fun as they delved into their creativity and had fun with it.  What started as seemingly just another grueling online assignment turned into an amazing success.

The name “Speckles” holds deep meaning and great sentimental value for the girls, going all the way back to their freshman year engineering and design class.  One of their first projects, and one of many times this trio would work together, was a classic egg drop, in which they had to build a contraption that would protect an egg from cracking when dropped.  The egg they received for their project was covered in tiny brown dots, and so it was aptly named Speckles.  What does an egg have to do with COVID-19, you ask?

“An egg symbolizes new beginnings, which is what Everett will experience when it comes out of this pandemic,” Hurley explains.  “Our goal of the app is to have a positive view on this whole situation and to see that there is a bright side to the end of this pandemic,” says Maharjan.

The group also chose the name because they like how it ties them back to the very beginning of their STEM journey at Everett High School.  Looking back on one of their very first engineering projects, it is amazing to see how far they’ve come.  And in case you were wondering, yes, Speckles survived the fall.

This talented trio all plan to go into STEM careers in the future, especially in the biomedical fields.  So while this app was just a prototype, who knows?  Maybe one of them will discover a cure for the next major pandemic.

Whatever amazing careers these three will go on to have, the hard work and passion for STEM that they poured into this project is a sure sign that they have bright futures in the STEM world.  This accomplishment is not their first, and it will most certainly not be their last.