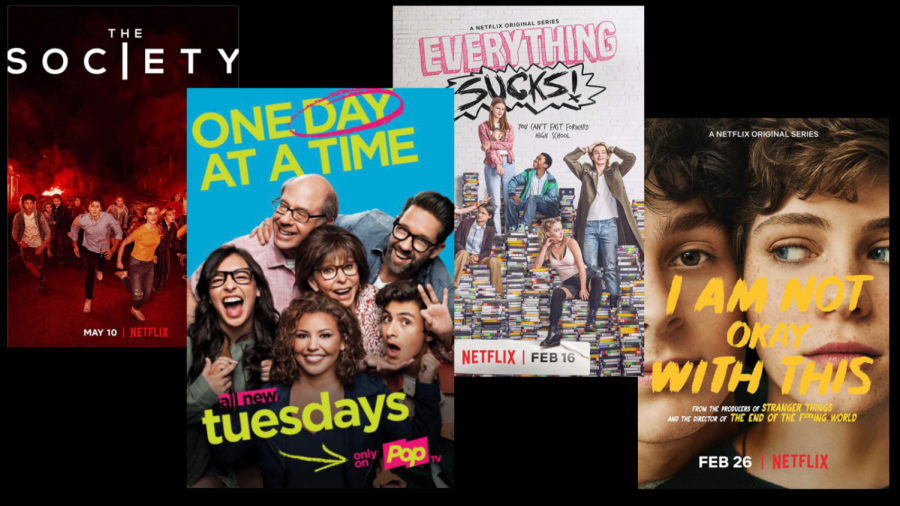 Netflix has long been praised for its inclusivity and diversity in its original series and movies, especially among the LGBTQ+ community.  Yet lately it seems that series involving LGBTQ characters are being cancelled left and right.

To any LGBTQ readers, think of your favorite Netflix original that involves a LGBTQ character.  Is it “Everything Sucks”?  “The Society”?  “I Am Not Okay With This”?  If so, you’re out of luck, because they were all cancelled after only a single season.  All of these shows did a great job at including diversity in all different areas, from race to sexual orientation to disability and more, and besides that they were just really good shows.  Yet Netflix felt that it was unnecessary to continue their stories, to the disappointment of their loyal audiences.

One of the biggest disappointments was when Netflix cancelled one of the greatest shows I have ever seen in terms of comedy, plot, theme, and diversity, “One Day at a Time.”  It was super popular among audiences and highlighted not only an amazing LGBTQ relationship between a lesbian and a non-binary teenager, but also important topics such as mental health, veterans, diversity, and immigration, just to name a few.  “One Day at a Time” covered issues relevant to society while also being relatable, heartfelt, and ridiculously funny.  And yet it was cancelled after three amazing seasons, and clearly not because of its lack of popularity, since it was picked up by POP for a fourth season and continues to have great ratings.

Netflix has said that audiences tend to decrease in size in the third and fourth seasons of shows, so they often cancel their original series after two seasons.  Also, due to the effects of COVID-19, the production of some shows had to be halted or cancelled completely.  This is understandable, but looking at some of the shows and movies they’ve kept, it seems like the same standards don’t apply to all.  Take this summer’s hit “Outer Banks”, a show which I would describe as not terrible at best, has already been renewed for a second season.  And we can’t forget about “The Kissing Booth” series, which I can say without a doubt are some of the worst romance movies I have ever seen.  They feature some of the unhealthiest relationships I’ve ever witnessed in a teen movie, which are highlighted due to their subpar plots, and now I am forever stuck grieving the four hours of my life wasted watching them.  And while there was a gay character featured in the second film, he was popular and white and had maybe five minutes of screentime.  Revolutionary, Netflix.  There never should have been a first “Kissing Booth”, and yet a third installment of the movie series is scheduled to be released in 2021.  As a gay teenager, it’s hard to watch some of the worst movies and series get renewed while I’m stuck watching the same season of an amazing series with characters I can relate to over and over again, knowing that I’ll never get to know where the rest of their lives take them.

To give credit where credit is due, Netflix has done a better job than some other networks of making their originals inclusive and diverse, but they need to do better.  The token thin, white, gay character in a mostly straight story has played itself out.  People want to see themselves on the screen, and for more than one measly season.  Let’s stop applauding Netflix for their inclusion and instead, make that the standard that we hold them to.